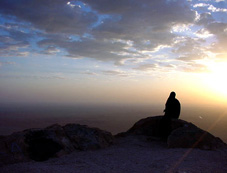 Ars Moriendi (“The Art of Dying”) is the name of two related Latin texts dating from about 1415 and 1450 which offer advice on the protocols and procedures of a good death, explaining how to “die well” according to Christian precepts of the late Middle Ages.

♦Each time an aspirant sinks back into his habitual lower state, it is always his attention, these states cannot become active, nor have any existence. He is placed in a curious situation, faced with a dilemma which he cannot comprehend at first. Through weakness, he is continuously being seduced and deluded into agreeing to enter into this strange sleep, losing the awareness of his being and “dying” every minute of his life without ever realizing what is happening to him. He will gradually come to see what vital role the attention plays in this strange battle for the overcoming of his inner death and on what secret plane the latter is being subtly fought all the while.

It is only in understanding the significance of this inner death that the overcoming of the ultimate death that awaits him can—and must—already start to take place in him in this existence. It needs a subtle inner discernment of knowing what to favor and protect in himself and what to relinquish.

A new birth into a higher form of life can become possible only insofar as the seeker abandons existing solely for himself and begins to live through and for that which is divine in him, giving it his all.

Needless to say, this entails much repeated and patient effort—until the day may come when he will have finally earned the right to abide in this holy region of his being without falling again into the darkness of the sorrowful world of his ordinary self.

Jeanne de Salzmann : I am open to a new intelligence Teresa of Avila : This little palace of my soul
Scroll to top