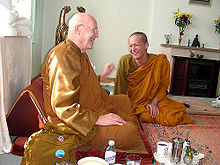 I had discovered this “inner sound” many years before but had never heard or read any reference to this in the Pali Canon. I had developed a meditation practice referring to this background vibration and experienced great benefits in developing mindfulness while letting go of any thoughts. It allowed a perspective of transcendent awareness where one could reflect on the mental states that arise and cease in consciousness.

Ajahn Sumedho , first abbott of Amaravati, is the most senior representative of the Thai Forest Tradition of Theraveda Buddhism in the West, author of The Sound of Silence 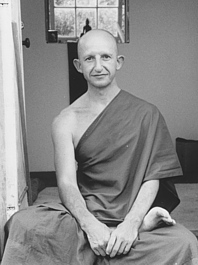 ‘Nada Yoga’ (meditation on the inner sound)  is a practice that is known in Vedic, Buddhist and other traditions to be a powerful and liberating spiritual discipline and is also one that I have used for over twenty-five years, to great benefit. »

Ajahn Sumedho’s disciple, abbott of Amaravati monastery in the Forest lineage of the Theravada  Buddhist tradition 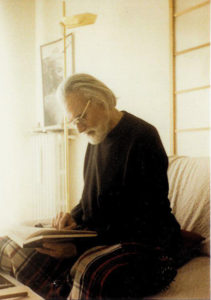 The seeker requires concentration aids. Bodily sensation and attention to breathing comprise two excellent methods of returning to oneself in a continual now. In addition to these two aids, there is a particularly effective one to reduce inner chatter: it is the inner sound, the Nada as it is called in India, which can be heard inside the ears and head.

The value of this form of meditation cannot be overstated, especially for those who do not yet know where their attention should be directed, and who thus experience great difficulty retaining their concentration during meditation.
Having taken his meditation posture, and prepared himself mentally and physically—by quieting his mind, relaxing, and feeling a deep global sensation of his body—the seeker should now decide firmly not to move any more.
Closing his eyes, he should remain as still as possible, listening internally with sustained attention. If he can be inwardly quiet enough and deeply absorbed in the search, he will, if he is truly persistent, suddenly become aware of an unusual, feeble sound that can be heard deep inside the ears and head, concealed from him before and obscured by the din of his incessant mental restlessness.
Edward Salim Michael , author of The law of Attention chap Nada Yoga
https://blog.meditation-presence.com/wp-content/uploads/2017/09/bandeauaccueil.jpg 0 0 vidji https://blog.meditation-presence.com/wp-content/uploads/2017/09/bandeauaccueil.jpg vidji2018-08-14 15:43:412018-08-14 15:48:34NADA YOGA the Inner Sound Ajahn Sumedho Ajahn Amaro Edward Salim Michael